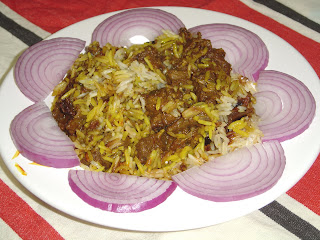 I studied Applied Art at Abhinav Kala Mahavidyalaya in Pune. If you've ever driven past it, you know it takes real courage to admit that one studied there. During my fourth year, our class was situated in the basement of the college. This was great for two reasons. If it rained, the water in class came up at least waist level and all the tables would be floating. And if there was no electricity, it would be pitch dark. In any event, classes would be cancelled for the day. When this happened, there were two options. Either place yourself among some permanent fixtures at Vaishali. Or pig out on some of the most decadent Mutton Biryani at Durga Biryani House. Durga, which is situated on Tilak Road, right outside Tilak Smarak Mandir, is in a tiny 12' X 12' shop. It has a mezzanine floor which houses three and a half tables. I can bet good money that the mezzanine is an illegal construction. However, this is a minor detail when you consider that this little restaurant churns out the best artery clogging mutton biryani in Pune. If you are to visit this fine establishment remember to have a generous supply of Gelusil® with you.

Method
In a large pot heat oil on high and add ginger and garlic. When the garlic starts to splatter add chopped onion Once the onion browns on the edges, add tomato and stir Allow to cook for 5 min Then add chili, turmeric and garam masala Allow to cook for a few minutes and add Lamb Stir and allow to cook for a minute or two Add water and mix well Turn heat to medium and allow to boil till almost all the water is gone and the curry part looks like a lumpy paste.
In a wok deep fry the sliced onions till golden brown and crisp
In another pot cook rice till it is almost cooked. i.e. there is a tiny grain at the center of the rice
Take a thick bottomed pot and place some of the fried onions
Then add a 1 inch layer of Rice
Cover it with a layer of Mutton
Repeat layers till you have 3 sets of layers.
Place lid on the pot and seal with dough or a damp towel
Place on medium heat till all the rice appears cooked.
Serve with Raita or Dahi-Kanda
Posted by Adhi Potoba at 4:04 PM 11 comments: 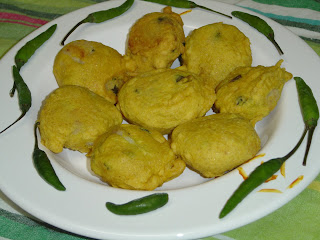 No matter how many super-highways are built, I still maintain that the best way to travel Bombay-Pune is by Deccan Queen. Whenever I have traveled by the Deccan Queen, I made sure I got the window seat. I am always impressed by the beauty of the Sayadhri Ghats as the trains passes through the mountains, especially in the monsoons. And of course the monkeys. Who doesn't love monkeys. When you're traveling back to Pune from Bombay, the trains stop at Karjat station for 15 min where a second engine is added to the train. This is to help the heavy train climb the ghats. As soon as the train pulls into Karjat Station, one is greeted by some Men in Blue. No, not the ones (the Indian Cricket team) that have been disappointing us year after year with their dismal performances. I am speaking of Divadhkar Vadawala and his men in blue uniforms that bring the hot dumplings of deliciousness into the trains. This is probably the most delicious part of the Bombay-Pune train journey and are extremely famous. There was an incident a few years ago when an American NRI from returning to his native Pune wanted to get really fresh vadas. He got out of the train and went straight to the stall. Unfortunately the train started to move and there was an accident. He never made it home. It gives new meaning to the term "food to die for". A really tragic story, but what a way to go.

Method
In a pan mash potatoes, onion, chilis, garlic, ginger, lemon, coriander and salt into a solid mixture making sure that the potatoes don't have any large lumps.
Make small balls the size of a golf ball
Place aside

Mix besan, chilli powder, turmeric, cumin, baking soda and salt in a bowl
Add water and mix till it turns into a thick batter

Heat oil in a wok
Dip the potato balls in the batter and deep fry till golden
Serve with mint or tamrind-date chutney
Posted by Adhi Potoba at 1:02 PM 7 comments: