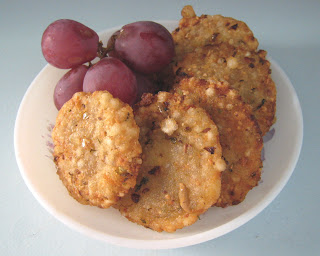 Long before Bhandarkar Road was mauled by malls, there was only one block with any commercial activity on the entire 1 km strip. It was the block opposite Sane Dairy and consisted of 6 completely unrelated stores. A food store named Ruchira. A tea house the name of which escapes me. A store that was split into two smaller businesses: M/s Joshi (the granary) and Snacks (the grocery). The Prince laundry. And then there was a bicycle repair shop and a car garage. In spite of this weird juxtaposition they all served the community in perfect harmony. Ruchira was the new kid on the block and had added a few extra items to his daily inventory to compete with the older, well known Snacks. The owner of Ruchira was a generously proportioned man with pitch black skin (and only partially visible at night), with an extremely cheery disposition. He would wave to you from behind the register whether you knew him or not. His offerings in terms of fresh ready-to-eat foods were very humble. A tray each of Batata Vada, Sabudana Vada, Kachori and Khamang Dhokla covered with a netted dome to keep the pesky flies at bay. Although this was 25 years ago to this day, his was the best Sabudana Vada I have tasted. Crisp, hollow and way too delicious for it’s own good. As Pune grew and fast food places mushroomed all over, the ready-to-eat food at smaller stores like Ruchira lost their allure. Later the Sabudana Vada I so cherished was discontinued at Ruchira. Maybe the sales dwindled, maybe the cook died or maybe the owner just didn’t care to compete with the likes of the ‘food mall’ that has sprung across the street. And now that Pune has transformed into a bustling metropolis, I miss little city that I grew up in just as much as I miss Mr. Ruchira and his crispy sabudana vadas.

Method
Mash Sabudana, Potatoes, Chilies, Peanuts, Coriander, Cumin Seeds and Salt till it is a homogenous mixture.
Make round balls from this mixture and then pat them down to flatten them like patties.
Heat oil and reduce to medium heat when it is hot.
Deep fry on medium heat till golden brown.
Serve hot with yoghurt.
Posted by Adhi Potoba at 8:50 PM 10 comments: