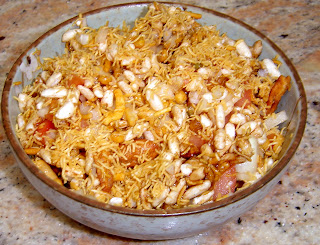 I grew up on Prabhat Road and our park was Kamla Nehru Park or KNP, as the college kids that order their chai "one by two" called it. My fondest memories bhel are outside the large iron gate of KNP. Bhola bhel was our "bhelwala". No real reason, that's just the guy my mother would take us to. A balding man on the wrong side of fifty with a pushcart and a permanent burnt umber complexion from making bhel under the scorching Indian sun. His pushcart had a hand painted board that advertised Bhola Bhel next to an anatomically questionable picture of Shankar. The glass containers that contained the papri and rice puffs were adorned with fading pictures of Bollywood stars whose star had faded decades ago. He cut onion really fine with a speed that would put the finest Waring chopper to shame. With a thick handle bar mustache and a cheery disposition he never failed to make serious small talk, even with his youngest customers. And for 70 Paise (in 1978) he would serve you Bhel on a single page of a glossy magazine and a little square from a slightly thicker cover would serve as the spoon. I would run back to the park with my friends and we'd sit under the biggest mango tree and enjoy Mr. Bhola's Bhel to the fullest with a spiced side of green chili. Sadly, Mr.Bhola is now making Bhel in heaven and the spot where his cart used to be is occupied by a chaiwalla. It was very relaxing to watch him make Bhel and I had watched him make it enough times to know the recipe by heart. So I dedicate this recipe to Mr. Bhola. Long after he has gone may his recipe live on in many corners of the world.

Method
In a small pot boil all the ingredients for the tamarind chutney.
In a big bowl mix puffed rice, farsan, onion, tomato, mango, cilantro and 4 tbsp tamrind chutney.
Add little chili paste according to your spice tolerance.
Serve in a small bowl garnished with Sev and Corainder.
Posted by Adhi Potoba at 7:34 PM 4 comments: