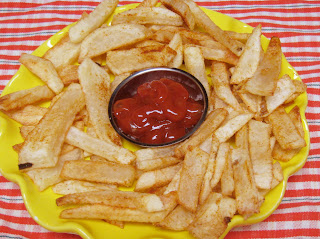 By the time I was in the 7th standard, I along with a few neighbourhood kids had perfected the art of making a good potato chip. Known in this country as the French Fry or in the fly over states as Freedom Fries (sad, isn't it?). In India young boys are always discouraged from carrying experiments in the kitchen. As a children of parents who were busy and away from home most of the day, my friends and I found the kitchens at our disposal during the afternoons. We would have potato chip parties between games of 'galli' cricket. It involved everyone stealing 2 potatoes from home and maybe some oil. Stealing oil from the oil dispenser on the kitchen counter was a rookie mistake that would get caught. Only the seasoned potato chipper knew to steal directly from the 15 litre Postman dabba as a few missing cups wouldn't be detected. The loot would then be gathered at one of the kitchens where peeling and cutting began. As a measure to increase the number of chips per potato, we would cut the potato longitudinally as opposed to making them longer. Also, thinner strips meant more chips. This tended to make the chips crispier. A few experiments with seasonings and it was a delightful mid-afternoon snack. Afterwards everything was cleaned and the evidence destroyed. Every time I sit with a paper cup full of fries beneath the golden arches, I can't help but think of my memories of cricket and masala chips.

Method
Julienne the potatoes and divide it into 3 portions.
Heat oil in a wok.
When the oil is hot put one portion in the oil
Stir occasionally
When the potatoes start browning on the edges remove from wok and place in a pot
Drizzle chilli, sugar, salt and garam masala
Mix thoroughly making sure all chips are coated with some seasoning
Serve with ketchup
Posted by Adhi Potoba at 11:10 AM 5 comments: